Tegan Davis returns from her hiatus to talk about the highs and lows of designing and publishing a new website for your library.  Tegan gives great advice for all phases of such an important project and highlights some of the many pitfalls.  We discuss project management generally and Dustin complains about bidding processes in government organizations.

I thought I’d spend a few paragraphs talking about a project I started a couple of months ago. It’s a data viewer for Utah newspapers, historical and current. You can check it out here: http://todrobbins.com/utah-newspapers/ 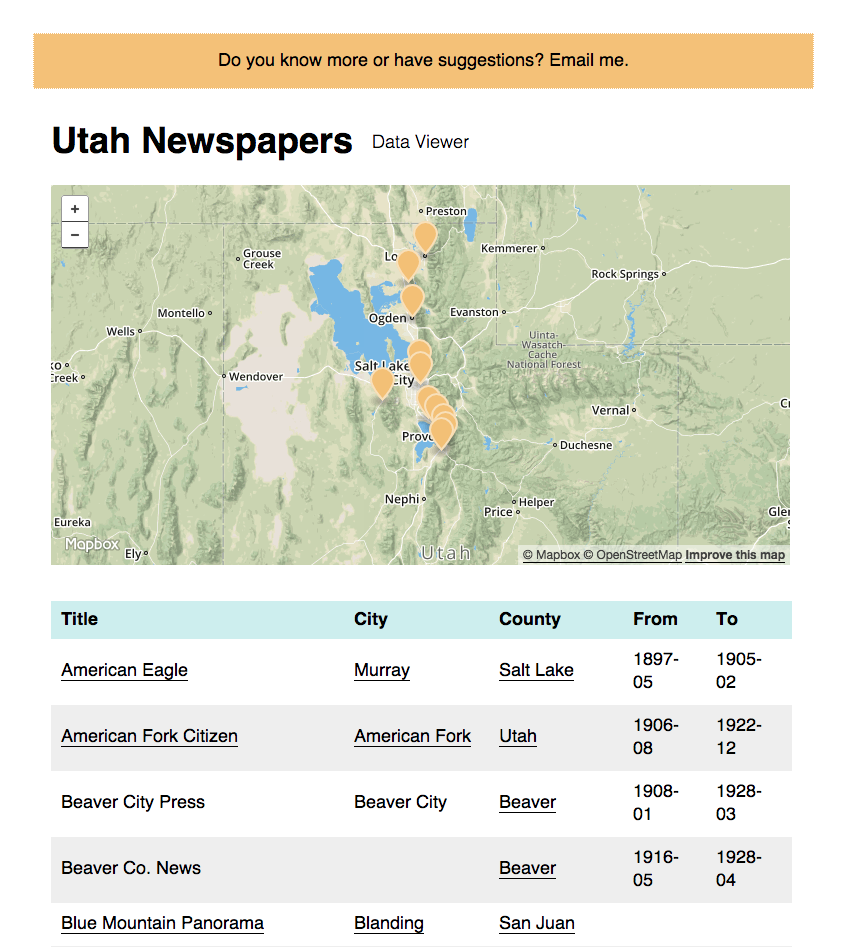 END_OF_DOCUMENT_TOKEN_TO_BE_REPLACED

Parker Cross joins the podcast today.  Parker is a photographer who loved libraries as a child, but has fallen away because of shushing and library fines.  I ask Parker, as a “NORMAL”, what he thinks libraries and librarians do in our communities and societies.  Parker is a smart person who delivers keen observations about libraries currently and into the future.

Most of us begin planning for September on or around September 5th.  However, I urge you to begin thinking about September today.  September 27 – October 3, 2015 is ALA’s annual Banned Books Week.  This is an annual celebration of the freedom to read supported by ALA’s Office for Intellectual Freedom.  Unfortunately, like most things in our life, good things only come after the paperwork is completed.  So you want to have your Christmas party? Make sure and finish the year-end reports.  I hear you want a raise?  Let’s go ahead and do your employee evaluation.  You want to celebrate the freedom to read during Banned Books Week?!?  Make sure and submit challenges to ALA!

“Since 1990, the ALA Office for Intellectual Freedom has maintained a confidential database on challenged materials. ALA collects information from two sources: media reports and reports submitted by individuals. All challenges are compiled into a database. Reports of challenges culled from media across the country are compiled in the bimonthly Newsletter on Intellectual Freedom; those reports are then compiled in the Banned Books Week Resource Guide. Challenges reported to the ALA by individuals are kept confidential and used for statistical purposes only. In these cases, ALA will release only the title of the book being challenged, the state, and the type of institution (school, public library). The name of the institution and its town will not be disclosed. A list of most frequently challenge books is compiled from these challenges for each annual Banned Books Week.”

It is essential that individuals submit CHALLENGES to ALA so that accurate information can be maintained and preserved.  As a public library director I faced formal and informal challenges on a weekly basis and reported almost none of them to ALA.  I did not consider how important this information was to our institutions and society as a whole.  This information helps articulate how and where intellectual freedom is being challenged and I missed several opportunities to share that information with broadly.

We need to contribute to a culture of open dialogue and education.  How can we do that if we are not preserving and sharing our own experiences with our profession and society.  Intellectual freedom is one of our most important ethics as librarians and it is important that we create reliable information for discussion.  Please share your challenges, both formal and informal, with the Office for Intellectual Freedom.

Report a Challenge through ALA

Report a Challenge through the Utah Library Association.

Annie Smith joins the podcast today.  Annie is an all star reference and instruction librarian.  Annie talks about getting to scratch her endless curiosity itch through reference and gives some great ideas for anyone who does reference or instruction.  Annie has embedded in and English class this semester and is exploring the value of embedded librarianship.  She is also a prodigious reader and book reviewer.

In fifteen days, the Federal Communication Commission (the full five-member commission) will be voting on net neutrality regulations. This is BIG! A year ago, the FCC endorsed a two-tiered system for Internet service providers (i.e. Comcast, Verizon, etc.), which could charge companies to send content to consumers. This would create ‘fast lanes’ for companies that can afford to pay for it. (Need a net neutrality refresher? Listen to Creative Libraries Utah’s podcasts #27, #41, and #66.)

However, the fight isn’t over. The groups opposed to reclassification under Title II (i.e. Comcast, Version, etc.) spent more than $75 million lobbying against it last year alone. Additionally, lawmakers are expected to introduce legislation this month to preempt any FCC rule on the subject. Your voice is still needed and there is still time to be heard!

We have reached our goal in KickStarter and we wanted to relay a special message to those of you that contributed: IT IS ALL YOUR FAULT!  Whatever we write this year, whatever we record, whatever we publish, YOU DID THIS TO THE WORLD!

Now, I know that sounded like a threat, but it is with the greatest appreciation that we thank: Joel Parker Henderson, Trish Hull, Pamela Martin, Anne, Elaine Stehel, Kristen Stehel, Leah Farrell, Jessica, Rebekah Tripp Cummings, Catherine McIntyre, Peter Bromberg, Liz Woolcott, Jake Hawkes, Goosey, Sloane Fife, and Donna Jones Morris.  We give a special thanks to Sam Passey and the Uintah County Library for sponsoring the podcast for the rest of 2015.  Thank you all for the opportunity to continue writing and recording about libraries.  Thank you for the chance to publish great ideas that can help our libraries and communities.  Thank you most of all for your support!  We are committed to a year of great conversation and interesting library material.

If you would still like to support the website, the KickStarter is open through the end of the month.  All money will go to web and podcast hosting in 2015 and 2016.

THANK YOU ALL SO MUCH!

(The author apologizes for the egregious use of exclamation points and CAPITALIZATION!)

We have a full CODE-RED Pamela Martin alert today.  Pam is an Instruction and Outreach Librarian for Utah State University and the President of the Utah Library Association.  We discuss conferences and the many exciting things going on through ULA.  If you don’t know Pam you should be ashamed of yourself, and this will be a good time to get to know her!

Last week, Sonia Sotomayor spoke to a sold out crowd at the University of Utah about her life, her work as a United State Supreme Court Justice, and her new memoir, “My Beloved World.” The format for the event was a Q and A session between Justice Sotomayor and Christine Durham, Utah’s first female Supreme Court justice, who served as a moderator for the event. Rather than stay on the dais with Justice Durham, however, Justice Sotomayor wandered through the crowd answering questions, taking pictures with children, and speaking eloquently on topics such as books, art, childhood, and feeling like an outsider.

What does this have to do with Creative Libraries Utah, you ask? Through most of the Q and A — and likely in her memoir as well — Justice Sotomayor spoke incessantly of books. Growing up poor in the Bronx to Puerto-Rican born parents, books for Sotomayor were a pathway to a different world. She read voraciously as a child and credits her desire to be a lawyer — and drive a hot rod — to Nancy Drew. Sotomayor spoke lovingly of her neighborhood library in the Bronx, which seemed miraculous to her as a child. Books? For free? Yes, please! For librarians this story is a tale as old as time and always reinforces the importance of libraries, especially for children with limited opportunities to secure books elsewhere.

At one point in the session, however, Sotomayor said something that knocked me off my high horse. She said that in all those weekly trips to the library throughout all those years of her childhood, she never had any idea what librarians did besides check out books. They never took any interest in her. Huh, what? How could any librarian not take an interest in a precocious little girl who consumed books like Hummers consume gasoline? What an incredible missed opportunity to impact the life of a woman who would go on to become a U.S. Supreme Court Justice. To be sure, Sotomayor still has incredibly fond memories of her library, but how much fonder would those memories have been had they included a librarian who helped her select literature, enlisted her to be a volunteer in summer reading programs, or helped her with her college applications?

Perhaps I’ve gotten used to people waxing poetic about their childhood experiences with librarians. I love passages like this one from Neil Gaiman that extoll the virtues of librarianship:

They were good librarians. They liked books and they liked the books being read. They taught me how to order books from other libraries on inter-library loans. They had no snobbery about anything I read. They just seemed to like that there was this wide-eyed little boy who loved to read, and would talk to me about the books I was reading, they would find me other books in a series, they would help. They treated me as another reader – nothing less or more – which meant they treated me with respect. I was not used to being treated with respect as an eight-year-old. (Neil Gaiman, Why our future depends on libraries, reading, and daydreaming)

This is the kind of passage that makes me proud to be a librarian. In contrast, when I heard Justice Sotomayor say that she didn’t know what the librarians at her library did, I felt like, as a profession, we had failed her. No matter how many amazing books she was supplied, she still was not served.

John Pappas, Library Manager for Bucks County Free Library is on the podcast and it is an understatement to say that I am smitten!  John talks about the innovative ways that he is using games in his library and as community outreach.  He encourages all libraries to consider non-traditional collections and generally shares a great perspective on libraries!

Board in the Library

John also wants everyone to stop by the Game Lounge in San Francisco at ALA 2015: